To view these pictures full size, click on them. Click your browser’s back button to return to this page. 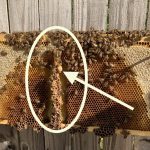 Inspection and found something I really didn’t know what to make of. It appeared there were two separate issues going on. As you can see in the pictures, apparently the girls didn’t like a particular strip of the foundation and refused to pull comb on it. That made for a strange configuration of comb.

As you can tell, where the dark part of the comb is, which would normally be where bees are being laid and reared, is empty. That usually means that the existing Queen is weak or even absent. The workers, not having bees to attend to, began to feed a bee “royal jelly” and began to raise a new Queen. This is what happens when bees are preparing to swarm. See the Queen cell where the arrow is pointing.

About 2 months later, I observed no activity at either hive. At the next hive inspection I found that both hives had been abandoned. 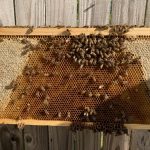 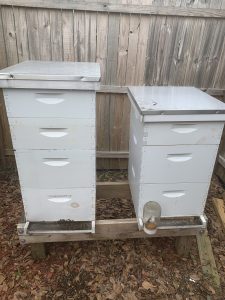 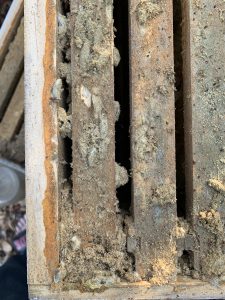