Although the Western or European Honey Bee (apis mellifera) is the most common of the twelve or so species of honey bees worldwide, according to our bee source, we have bees with a mixture of ethnicities. Our bees are mostly Italians. They are what’s known as the base stock of survivor bees. Our source brought in Carniolans for their ability to work, Cardovans for their gentleness, three banded Italians for general genetic stability, less than five percent of Russians for their durability, (but not enough to encourage swarming). Our bees are also bread with what is known as VSH (Varroa sensitive hygiene), which is a behavioral trait of honey bees in which they detect and remove bee pupae that are infested by the parasitic mite Varroa destructor which can be detrimental to bee colonies. Every year our bee source looks at what is needed to add to the bee’s genetic makeup to produce bees that are easy to work with. It is important to note that we get our bees from an Alabama Master Beekeeper. So, it appears, that we will be keeping “mutt bees” here in Wetumpka, Alabama.

Honey bees are eusocial insects, meaning, that they create colonies with a single fertile female known as the “queen,” many sterile females known as “workers,” and small proportion of fertile males known as “drones.” Individual colonies can house tens of thousands of bees. Colony activities are organized by complex communication between individuals, through both pheromones and the dance language.

Bees produce honey by collecting nectar, a clear liquid consisting of nearly eighty percent water and complex sugars. The collecting bees store the nectar in a second stomach and return to the hive, where worker bees remove the nectar. The worker bees digest the raw nectar for about thirty minutes, using enzymes to break down the complex sugars into simpler ones. Raw honey is then spread in empty honeycomb cells to dry, 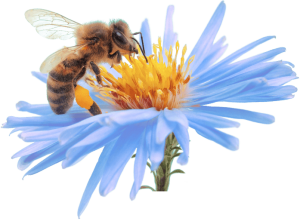 reducing its water content to less than twenty percent. When nectar is being processed, honey bees create a draft through the hive by fanning with their wings. When the honey has dried, the honeycomb cells are sealed (capped) with wax to preserve it.

Beeswax (cera alba) is a natural wax produced by honey bees of the genus Apis. The wax is formed into “scales” 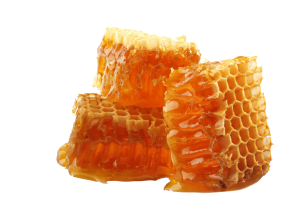 by eight wax-producing glands in the abdominal segments of worker bees, who discard it in or at the hive. The hive workers collect and use it to form cells for honey-storage and larval and pupal protection within the beehive. Chemically, beeswax consists mainly of esters of fatty acids and various long-chain alcohols. Beeswax has long-standing applications in human food and flavoring. For example, it is used as a glazing agent, a sweetener, or as a light/heat source.