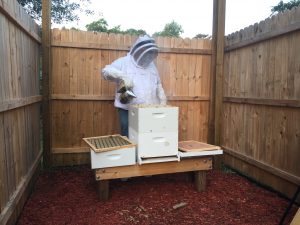 This was our first in-depth look into the hive this year. I did actually 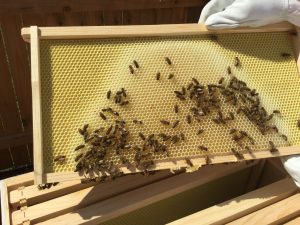 do some work earlier (I took the bagged sugar that we fed them over the winter off the hive) but I didn’t actually have to go inside to do that as the sugar was sitting directly on the top of the frames.

As you can see the girls have started to pull comb. The bulge in the frame shown is actually built up comb the flat part is what the foundation initially looks like.

As we went into the hive a little deeper, we discovered that not only had they began to pull comb, but they had also began to make, store and cap honey. 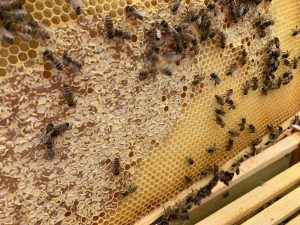 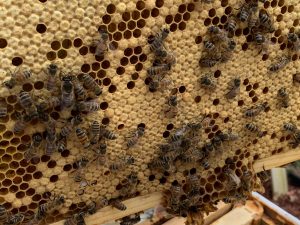 The capped cells are baby bees.

been laying like she is supposed to. We were unable to find the queen herself, but seeing all of her brood was a pretty good indication that she is healthy and happy. The photo with the capped cells shows brood at several stages of development. If you’ll notice near the bottom there are three cells that are not capped and have white things in them. Those white objects are bee larvae. At this point in development, they are still being fed by the worker bees. Near the upper right of the photo, you can see a newborn bee with only her rear-end sticking out of a cell. She is most likely cleaning out the cell she just emerged from. 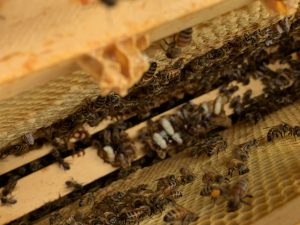 Other bits of knowledge we gleaned from this inspection was that 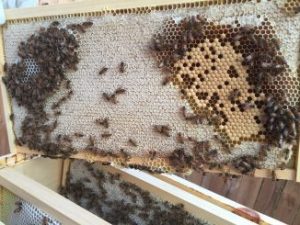 the hive had NOT been taken over by aliens or wax moths or any other honey bee enemy, but rather that I was a bee murderer! As the photo shows, there are exposed bee larvae that I inadvertently killed when I lifted the frame above them out of the hive body. Apparently what had happened was that the girls built what is called “ladder comb” that connects the frames together. The queen figured that those cells were just as good as any to lay eggs in and so that’s exactly what she did. While we always try to be really careful and not kill any bees, these few were an accidental causalities. As it turns out, this happens to bee keepers quite often.

As you can see in the Honey and brood picture, while beautiful capped honey is one of our ultimate goals, this picture shows a potential problem. Queen bees do not like to walk across honey. Queen bees need plenty of room to lay eggs. Apparently, our girls didn’t read the manual and began putting honey any and everywhere, thus leaving the queen little room to lay eggs and raise brood. Queens in this situation are know as “honey bound queens.” The way we dealt with this issue was to move the frames that were full of honey to the outside edges of the hive and move the frames with open cells toward the middle of the hive close to the queen. That way the queen would have more space to lay eggs. More to come. 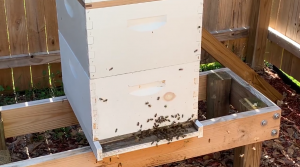 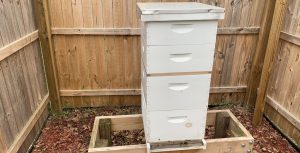