Our hive stand took only a few hours to build, but it actually took place over a couple of days. I got a late start on Friday (4:30 p.m.) and the dark caught me. I got the pieces cut, put everything away and called it a day. Bright and fairly early on Saturday, I got all the pieces together and started building the stand. I determined the size of the stand by estimating how 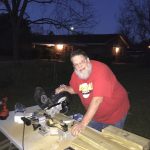 much space I’d need to work the hive. Considering that I have only briefly done some hive work (in my teens), this was really just an estimate. I decided that I should probably put a couple of feet at each end of the hive stand to give plenty of room to maneuver. So the math went like this. 8 feet of space with 2 feet of space at each end of the hive stand equaled a 4 foot hive stand. Stand height, from what I’ve read, is up to the beekeeper, but the main goal is to keep the hive off the ground. I read in several places that the bottom of the hive should be at the beekeeper’s knee height. As a result, I settled on 18”. I used some scraps of 4” x 4” posts and a couple of 2” x 6” boards. To join it all togather, I used lag screws with a 3/4” hex head and washers. I figured stronger is better.

Now there are a couple of things I learned. First, you must keep things square…start to finish…SQUARE. The photo to the left is what happens when 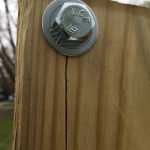 you don’t check every single joint for square. 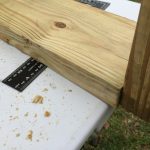 Also, you must drill pilot holes that are almost the same size as your screws. They should only be a shade smaller. Small pilot holes result in split wood, as shown in the picture to the right. As I now have an out of square split piece of wood, off to Lowe’s I went. After returning home with a new 2” x 6,” unbolting the 3 corners in the first attempt, I started “Hive Stand 2.0”. This time, I checked for square on every joint, drilled all of my holes (with the correct size bit this time), and loosely drove in the screws. Then I worked corner to corner and top to bottom to tighten each one down checking for square for every joint. After undoing and then redoing the long part of the hive stand, the finished top portion was finally what? You guessed it, square. Next came the legs. As mentioned earlier, I used some scrap 4” x 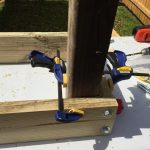 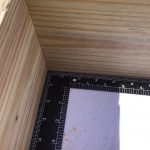 4” posts that I had left over from another project. After cutting the stock to 18” I clamped them into position. I then drilled my holes and attached each leg to the stand. Each leg was attached to the frame with 2 lag screws, 1 from each side, making sure that whichever side had the screw at the top, then the other screw was at the bottom. That way there is no chance of the screws running into each other inside the legs, plus it will give equal stability from both sides. 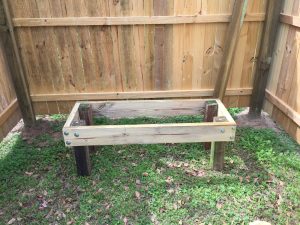 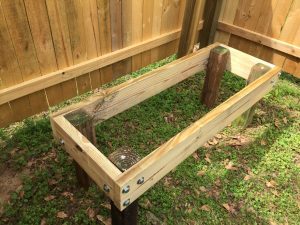 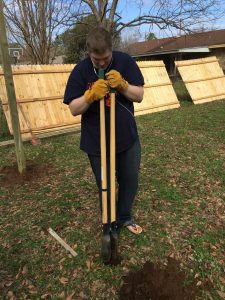 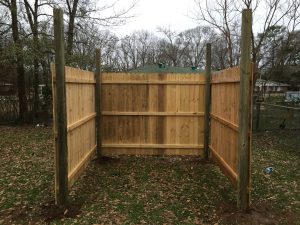 Building in the Creature Comforts For the Beekeepers (Not the Bees)